It’s tomato season! Let’s go for something different…..
These wonderful tomato recipe ideas are taken from the book SCIENCE IN THE KITCHEN published in 1893.

You may have to lean on your instincts a little to interpret them. There seems to be an abundance of sugar and cream, but you could always omit or use alternatives. If you have fresh herbs, especially basil, add some to your tomato recipes to really enhance the taste.

Don’t be reluctant to cook fresh tomatoes, they are one of the few fruits that don’t lose vitamin C during cooking!

Fill a pudding dish two thirds full of stewed tomatoes; season with salt, and sprinkle grated crumbs of good whole-wheat bread over it until the top looks dry. Brown in the oven, and serve with a cream dressing.

Wash and wipe a quantity of smooth, even-sized tomatoes; remove the stems with a sharp-pointed knife. Arrange on an earthen pudding or pie dish, and bake whole in a moderate oven. Serve with cream.

Peel and slice the tomatoes. Put them into a double boiler, without the addition of water, and stew for an hour or longer. When done, serve plain with a little sugar added, or season with salt and a tablespoonful of rather thick sweet cream to each pint of tomatoes.

If the tomatoes are thin and very juicy, they may be thickened with a little flour rubbed smooth in a little cold water. They are much better, however, to stew a longer time until the water they contain is sufficiently evaporated to make them of the desired consistency. The stew may also be thickened, if desired, by the addition of bread crumbs, rice, or macaroni.

Take a pint of stewed tomatoes, which have been rubbed through a colander, thicken with one and one fourth cups of lightly picked crumbs of whole-wheat bread, or a sufficient quantity to make it quite thick, add salt if desired, and a half cup of sweet cream, mix well, and bake for twenty minutes.

Or, fill a pudding dish with alternate layers of peeled and sliced tomatoes and bread crumbs, letting the topmost layer be of tomatoes. Cover, and bake in a moderate oven for an hour or longer, according to depth. Uncover, and brown for ten or fifteen minutes.

Boil dried or fresh corn until perfectly tender, add to each cup of corn two cups of stewed, strained tomatoes, either canned or freshly cooked. Salt to taste, boil together for five or ten minutes, and serve plain or with a little cream added.

Heat to boiling one pint of strained stewed tomatoes, either canned or fresh, and thicken with a tablespoonful of flour rubbed smooth in a little water; add salt and when thickened, if desired, a half cup of hot cream. Boil together for a minute or two and serve at once.

Select perfectly ripe tomatoes, and peel at least an hour before using. Slice, and place on ice or in a cool place. Serve plain or with lemon juice or sugar as preferred.

Use one half small yellow tomatoes and one half red. Slice evenly and lay in the dish in alternate layers. Powder lightly with sugar, and turn over them a cupful of orange juice to a pint of tomato, or if preferred, the juice of lemons may be used instead. Set on ice and cool before serving.

Broiled Tomatoes
(These days we grill instead of broiling!)

Choose perfectly ripened but firm tomatoes of equal size. Place them on a wire broiler, and broil over glowing coals, from three to eight minutes, according to size, then turn and cook on the other side. Broil the stem end first. Serve hot with salt to season, and a little cream.

Fill an earthen pudding dish with alternate layers of stale bread and fresh tomatoes, peeled, sliced, and sprinkled lightly with sugar. Cover the dish and bake.

Are you growing your own tomatoes this year? Get the most from your plants with the handy tips in this handy mini-guide: 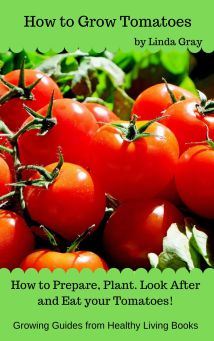 I get around to newsletters about once a week-ish! If you’d like to subscribe I can email you this handy printable pdf with 10 Traditional Family Games for free!